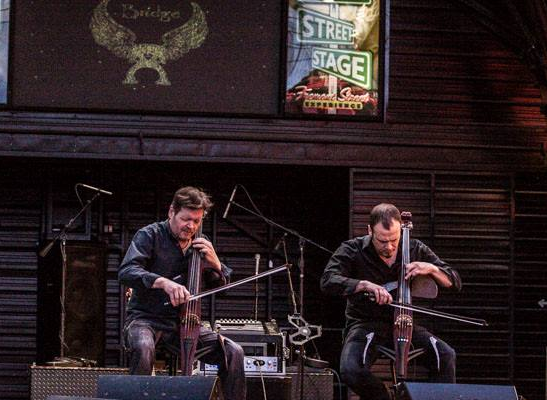 BRIDGE was formed in April of 2012 by Mert Sermet and Jerry Pence. Initially created as a fun diversion from the usual routine of backing up visiting artists in local Vegas showrooms, BRIDGE quickly gathered a large and enthusiastic following of fans from across the country, and around the world. Their show is a high energy fusion of multiple styles, ranging from classic Led Zepplin and Metallica to contemporary hits by David Guetta and Adelle.

After a six month stint performing nightly on the 3rd street stage at the world famous Fremont Street Experience, BRIDGE expanded to performing at venues across the country. BRIDGE performs at corporate events, and recently completed a 3 month run at Caesar’s Palace. 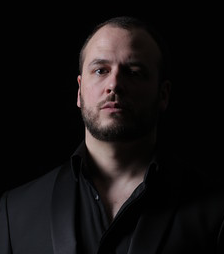 Mert, a graduate of the New England Conservatory of Music and co-founder of the electric cello duo BRIDGE, has performed with many of the biggest luminaries.

Jerry has been performing music since 1974. His musical journey has taken him around the globe, performing and recording a wide diversity of music from classical to heavy metal, with a whos-who of artists including Diana Ross, Barry White, Ray Charles, Henry Mancini, YES, Carrie Underwood, and hundreds of others. He holds the unique distinction of having performed professionally in leadership positions on violin, viola, cello, string bass, and guitar in Los Angeles, one of the countries most competitive musical regions. In 2001, a position as musical director for the French popstar Jean-Michel Danton brought him to Las Vegas, where he has performed in shows such as the enormously successful “Lion King” at Mandalay Bay, and “Phantom” at the Venetian. In April of 2012 he and Mert Sermet formed the group BRIDGE to showcase the expressive possibilities of electric string instruments, performing original arrangements of the music of J.S. Bach, The Beatles, Led Zeppelin, Jim Croce, Guns N’ Roses, Michael Jackson, Metallica, Adele, John Legend, and much more. As musical director for Hart Entertainment, Jerry Pence brings over 40 years of experience working with wedding and corporate events. You can have confidence that the music for your event will surpass expectations.

Cellist Mert Sermet, a graduate of the New England Conservatory of Music and co-founder of the electric cello duo BRIDGE, has performed with many of the biggest luminaries of the classical, pop, Latin, and country music worlds. He played at the prestigious Carnegie Hall under the baton of the internationally renowned conductor Daniel Barenboim. He also performed at the Grand Ole Opry with John Rich and Big Kenny of Big & Rich that same year. He has performed with Natalie Cole, Nelly Furtado, Carlos Santana, Smokey Robinson, India Arie, and has recently appeared with Stevie Wonder and tenor Andrea Bocelli. Mert performs as a regular member of the Las Vegas Philharmonic, and has also performed in several Las Vegas shows, including The Lion King, Phantom, Cheap Trick, ShowStoppers, and The Frankie Moreno Show.